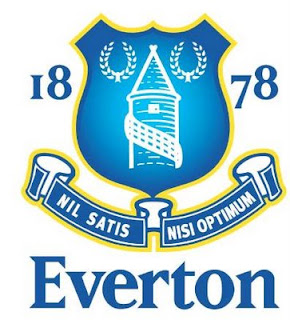 Everton were founder members of the league and won it for the first time in 1891. Another four championships came before the Second World War along with 2 FA Cup wins but the post war years were fallow for the Merseysiders and they dropped into the 2nd division for 3 years in the early 1950s.

The glory days returned in the 1960s just before their neighbours Liverpool took a stranglehold on the title. This dominance infuriated Evertonians and their saviour appeared in the guise of Howard Kendall. To begin with, he appeared to be able to do nothing about the inexorable slide but after winning a cup tie at Oxford, Everton turned the corner and began to challenge Liverpool for the major honours.
1984 brought the FA Cup to Goodison Park and the following season, the league championship returned. Howard Kendall left in 1987 after another championship win and things have never been the same as Everton have once again struggled. Joe Royle's arrival as manager saw their first trophy since those days as they won the FA Cup, beating Manchester Utd 1-0 and the fans expected ex-player Joe Royle to bring the good times back again, Joe Royle made some big signings, but Everton never looked like becoming a major force, and Royle left the club in February 1997.
After a brief spell with Dave Watson in charge as the caretaker manager, Howard Kendall took on the job as manager again, but was only there for a year and was replaced by Walter Smith, who had enjoyed huge success up in Scotland with Rangers. However, he found things much more tough at Everton and after flirting with relegation a couple of times, the club changed managers yet again, bringing in David Moyes from Preston, and he made an instant impact, keeping them up in his first few months and taking them to the brink of European football in his first full season.