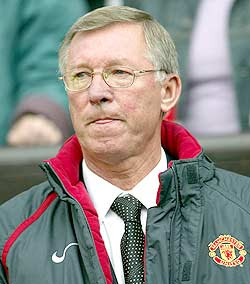 Alex Ferguson succeeded Ron Atkinson as Manchester United manager on 6th November 1986 and in his first full season guided United to a League runners-up position. This was nothing compared to the success he was to later enjoy at Old Trafford as he built a team capable of matching the best in Europe.

Born in Govan, Glasgow, Ferguson made his league debut for Scottish Second Division side Stranraer in 1957 having joined from amateur club Queen's Park and having represented his country at Youth and Amateur levels. He joined St Johnstone on a part-time basis in 1960 whilst completing his apprenticeship as a toolmaker for a typewriter manufacturer. He went on to score 19 goals in 37 league appearances for St. Johnstone before an exchange deal took him to Dunfermline Athletic as a full-time professional in 1964.

He gained his first taste of European football with the Fife club and moved to Rangers, the team he supported as a boy, in 1967, spending two-and-a-half years at Ibrox before joining Falkirk where he began to take on coaching duties. His final playing days were spent at Ayr United as a part-timer as he pursued business interests before being appointed to his first managerial position at East Stirlingshire in July 1974.

He moved to St. Mirren in October that year and promptly guided the Paisley club to the First Division Championship, in 1976-77. This led to a number of offers from the bigger clubs in Scotland and Ferguson accepted the manager's job at Aberdeen in 1978.

It was with the Granite City club that he really began to make a name for himself as The Dons eclipsed their Old Firm rivals taking three league titles, four Scottish Cups and a League Cup in eight seasons. Ferguson's greatest achievement at Pittodrie came in 1983 however, when he led Aberdeen to victory over Real Madrid in the European Cup Winners Cup.

The untimely death of Scotland manager Jock Stein in 1986 led to Ferguson taking over the national team temporarily for the World Cup finals in Mexico. He turned down the opportunity to remain in charge of Scotland on a permanent basis however, as well as several other lucrative offers, to move South of the border and manage Manchester United.

He was charged with returning the glory days to Old Trafford and United fans were expectant having waited over twenty years since their last league title. His first three years at United did not bring the success that he had enjoyed in Scotland however and it seemed at one stage that his tenure in Manchester may be short-lived.
Victory in the 1990 FA Cup final replay over Crystal Palace however began an incredible run that saw United win countless trophies as they dominated the English game. A European Cup Winners Cup followed in 1991 and a League Cup in 1992, as United were edged into second place in the League by Howard Wilkinson's Leeds United.

The following year saw the inauguration of the Premier League and Ferguson drafted in the mercurial French striker Eric Cantona, a League Championship winner with Leeds and a precocious talent. He was instrumental in helping United end their twenty-six year wait to capture the elusive League title, with Ferguson becoming the first man to manage teams to Premier League titles on both sides of the border.

1993-94 saw Manchester United and Ferguson repeat their success of the previous year, this time going one better, winning the League and Cup double. They almost made it an unprecedented treble but lost out to former boss Ron Atkinson and Aston Villa in the League Cup final.

Blackburn Rovers pipped the Reds to the league title in 1994-95 and Ferguson also tasted defeat in the FA Cup final, at the hands of Everton, but after a year of near misses United were triumphant once again, on both fronts, as they won another Double in 1995-96.

Another League title followed in 1996-97 before Arsenal stole the limelight, winning the Double themselves in 1997-98, coming from behind to snatch the Premiership trophy from the holders. This served only to stir Ferguson and his team into action as the 1998-99 season brought United an incredible treble. Despite losing his long-time assistant Brian Kidd halfway through the season, Ferguson - with the help of Kidd's replacement, Steve McClaren - led the Red Devils to victory in the League, the FA Cup and the European Champions League in an incredible two-week period, the like of which may never be repeated.

It earned him the respect and recognition - not that he didn't have that already - from his fellow managers as he was voted as the LMA's Manager of the Year by his peers.

Controversially, Manchester United did not defend the FA Cup the following year and they were knocked out of the Champions League at the quarter-final stage by eventual winners Real Madrid. They made a successful defence of their Premiership title however, beating Arsenal by an incredible 18 points.

The following season brought United's seventh league title in nine years as they clinched the Premiership crown yet again, this time with a record five games to spare, making Ferguson the most successful manager in the history of English football.

Alex Ferguson became Sir Alex in 1999 (having already received the OBE and CBE honours in 1983 and 1995 respectively) as his achievements in football were recognised. It is largely thanks to his success in the transfer market that he has achieved so much in English football.

Signings such as Peter Schmeichel, Dennis Irwin, Eric Cantona, Paul Ince, Andy Cole, Jaap Stam, Roy Keane, Teddy Sheringham and Ole Gunnar Solskjaer have all made significant contributions to United's success during Ferguson's time in charge. Alongside young players like David Beckham, Ryan Giggs, Gary and Phil Neville, Paul Scholes, Nicky Butt and Wes Brown, whose talents have been nurtured at Old Trafford, these players helped Manchester United produce an almost unchallenged level of performance that enabled them to dominate the domestic game in a similar fashion to the Liverpool side of the 1980's.

Having spent nearly 50million on two new players in the summer of 2001 - Ruud van Nistelrooy and Juan Sebastien Veron - Sir Alex took to the training field. Having served his apprenticeship as a coach at Derby and Old Trafford, Steve McClaren accepted an offer to become the manager of Middlesbrough. Having planned to retire as manager of United after the 2001/2002, Ferguson felt it would be unfair to recruit an new assistant for a single season and appointed Jim Ryan as his number two, taking on more of the coaching responsibilities himself.

Midway through the campaign, as speculation continued unabated as to who would replace Sir Alex, Manchester United boss had a change of mind and signed a new three-year deal to stay on at Old Trafford.

Hoping to lead his team to Champions League glory once again, as well as a record fourth straight Premiership title, Ferguson was disappointed to end the year empty handed. Despite drawing both legs of their semi-final with Bayer Leverkusen, Manchester United went out of Europe's most prestigious competition on away goals.

To make matters worse, the league title was won by Arsenal - who completed another domestic double - and Liverpool snatched second place and automatic qualification for the following season's Champions League proper.

Nevertheless, Sir Alex's desire for success remains as strong as ever, as do his efforts to promote the work of the LMA and improve the lot of his fellow managers and the English game itself.

Prior to the beginning of the 2002-03 season, he appointed a new assistant, Carlos Queiroz, the Mozambique-born former Portugal and South Africa coach, and smashed the British transfer record to sign Rio Ferdinand from Leeds United for a fee believed to be over 30million; signally his intentions for the new campaign.

Several injuries to key players at the beginning of the season, which led to a number of operations, hampered United's chances of regaining the Barclaycard Premiership title. However, an amazing run from the turn of the year saw Fergie's side claim 45 points from 17 games as they fought back to reverse Arsenal's lead at the top and snatch the championship, helped in no small way by the prolific Ruud van Nistelrooy who scored an amazing 14 goals in nine consecutive games towards the end of the season.

The Gunners had knocked them out of the FA Cup, while Liverpool beat them in the Worthington Cup final, but United's league form was just too good as Arsenal faltered in the final run-in.

Having breezed through the two group stages of the Champions League, United appeared to have a good chance of going all the way to the final, to be held at Old Trafford. But paired once more with defending champions Real Madrid, Sir Alex's side could not contain the likes of Zinedine Zidane, Raul, Luis Figo and Ronaldo, who scored a hat-trick in the second leg to ensure the Spanish side's progression to the last four.

Immediately after claiming his eighth Premiership title in 11 years with United, the manager set his sights on repeating 1999's European glory and began to plan the Champions League challenge for the following year.

At the LMA's Annual Dinner, Sir Alex picked up two awards, having been named as the Barclaycard Manager of the Year and, unsurprisingly, the Premier League Manager of the Decade.

In January 2004, with a year-and-a-half of his deal remaining, Sir Alex signed an extension which will see him move onto a 12-month rolling contract.

Later that year he was celebrating a record fifth triumph in the FA Cup, as United beat Millwall 3-0 in Cardiff - having seen off Arsenal in the semis - to lift the famous trophy. Young Portuguese winger Cristiano Ronaldo was the star of the final and it brought some consolation to Ferguson after a disappointing season in Europe and in the Premiership, where they finished third behind Arsenal and Chelsea.

Shortly after the end of the season, Ferguson signalled his intentions for 2004/05 with the £7million capture of Alan Smith from Leeds, while former assistant boss Carlos Queiroz returned to his post as the Scot's number two following his sacking from Real Madrid.

However, the duo, along with the purchase of superstar Wayne Rooney, could not help Ferguson and his team collect any silverware in the 2004/05 season.

The season started badly for the Red Devils with defeats to their two nearest rivals Arsenal and Chelsea in the FA Community Shield and first game of the Barclays Premiership respectivly. Things did not improve for the men from Old Trafford.

If anything, rather than any defecit in strike power, Sir Alex's biggest problem was that he had too many strikers to choose from. With Wayne Rooney, Ruud Van Nistelrooy, Alan Smith, David Bellion and Louis Saha all vying for places up front, a strong forward partnership - like the one between Andy Cole and Dwight Yorke in their time at Old Trafford - was hard to come by.

Despite this, United still managed good, though ultimatly unsuccessful, runs in the Carling and FA Cup - losing to Chelsea in the Semi-Finals of the Carling Cup and to Arsenal in the Final of the FA Cup.