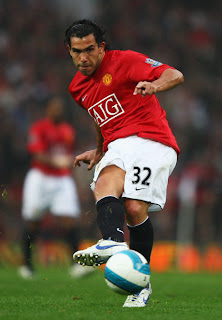 West Ham United snapped up Carlos Tevez on a permanent contract in August 2006, along with fellow Argentina international Javier Mascherano.

The pair, who had been linked with Manchester United and Arsenal, made the surprise move to Upton Park from Brazilian club Corinthians.

It was thought that the company which owns Corinthians, Media Sports Investments, wanted to showcase the pair in Europe for a season in order to boost their transfer values.

Tevez was voted the Argentine football writers' Footballer of the Year in 2003 and 2004, and also Sportsman of the Year in 2004, after he helped Boca Juniors win the Argentine championship and the Copa Libertadores.
He continued this fine form for the Hammers in 2006/07 as, after a slow start, he almost single-handedly kept the team in the Premier League with seven vital goals.

However, the legal ramifications of his third-part ownership dogged his season and when he decided to move on, a very complicated battle ensued that almost went all the way to the High Court. In August 2007 he finally completed a move to Manchester United.

His first season at Old Trafford proved wildly successful as he settled in well, played in most of the games and proved vital in their Champions League and Premier League double.