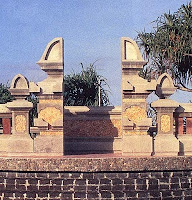 Even more fascinating is the richness of the skill displayed in these apparently simple architectural elements made by people whose primitive lifestyle does not demand of them any form of sophistication. Here is a demonstration of the power of aesthetics in its simple, original form.
Items such as woven rattan mats, bamboo floors and thatched roofs so often found in hotels have their humble beginnings in these rural villages, where the handicraft skills are traditionally a means of survival.
The most prominent feature in the Lomboknese architecture is the curved thatched rice-barn called a “lumbung”. Contructed simply in wood framing, bamboo and rattan floors and walls, this “symbol” of Lombok has been thoroughly exploited as an element of “pastiche” in the design of new resort hotels, although the scale at which the “lumbung” is recreated is completely out of synch with the original form.
Some houses still have their floors built up of dried buffalo dung. The appeal of the Sasak architecture is not attributed to any single feature but the perfect combination of everything manmade and the natural surroundings which in unison paint a landscape that is unpretentiously rich.
The distinctive bell-shaped roof covered in rice thatch from a previous season and the use of the “lumbung” for storage of rice illustrate the harmony of recycling. It is also a rather beautiful and almost sacred depiction of the South-east Asian relationship between man and rice.
There are, indeed signs of “modernization” taking place. Driving along the very narrow, hardly accessible roads and trying to avoid horse-drawn carts (the chief means of public transport, cidomo), one can observe the numerous handicraft and souvenir shops alongside paddy fields or concentrated at village centres. A unique form of interactive theatre is constantly taking place, where visitors from all over the world haggle over the prices of hand-made artifacts while the local people gather to witness this phenomenon of tourist invasion.
***
image sources: SilkWinds Magazine
techno code: H4FSG7XWBG8Q