Kebyar Duduk: One of The Best Known Balinese Dance 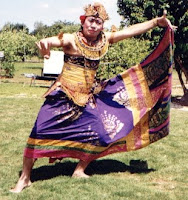 Kebyar Duduk is balinese solo exhibition dance that is performed to the accompaniment of a gamelan ensemble. Developed and popularized in the 1920s by a famous dancer-choreographer named I Nyoman Mario. A popular form of the dance is the Kebyar Duduk, which is performed while the dancer is sitting cross-legged.

Any limitations brought about by the lack of mobility in the lower limbs is more than compensated for by subtle upper-body movements and highly nuanced facial expressions.


In one of Mario’s performances, a contemporary observer described the artist as “wriggling like a trained cobra, swaying in a way that recalled the dance of a praying mantis to fascinate its prey, or stiffening with commanding elegance.”

In the Kebyar Trompong, the performer plays a percussion instrument called the trompong while dancing and dexterously twirling the tromping sticks in his hand.