Review - Edges of The World 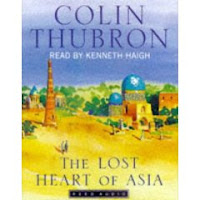 Title : The Lost Heart of Asia
By: Colin Thubron
Pages: 374's
Ever since the collapse of the old Soviet Union, the magnetism of Central Asia has become irresistible to travel writers. First, of course, is the opportunity now to wonder around free from the clutches of intourist guides. Then there is the challenge of finding the answer to the fascinating question of what is the become of these five newly independent republics artificially created by Stalin. “Would they hurl themselves into the Islamic furnace,” the author asks, “Or reconvene in a communist mass?”
Finally there is the sheer romance of the place. Who can visit Samarkand – “it conjured no earthly city. It is a heart-stealing sound” – and be unmoved ? The author begins his jurney in Turkmenistan, poorest and wildest of the Central Asian republics, and winds his way leisurely through the rest of them, visiting shrines, encountering people, exploring markets and museums.
Thubron seems to have an affinity for big places. His last two efforts – Among the Russians and his 1987 book on China, Behind the Wall – were wide-ranging travelogues. This one is huge and formless too, like the emerging republics themselves.
***
Image source: Asiaweek Magazine