A Universal Ideal of Beauty 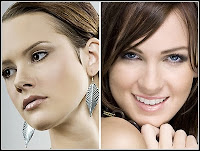 Chances are the beauty of a young woman’s face would be as recognizable in London as in Tokyo. Compared to her peers, she would have larger eyes relative to the rest of her face, higher cheekbones, a more delicate lower jaw, fuller lips and shorter distances between both nose and mouth and mouth and chin. These are universal characteristics of a beautiful female face, according to an article published in nature.
Researchers in Japan and Britain made three composite faces (based on 224 facial features) from a group of 60 photographs: a whole group average, an average of attractive faces and an exaggeration of the beautiful average. The third composite accentuated the features that distinguished the second face from the first.
In both the Japanese and British studies, viewers preferred the third face to the second, and the first face least of all.
The study also challenges the prevalent theory (first mooted in the last century) that an “average” face is considered more attractive than one with slight distortions from the norm.
***
image sources: topbeautyfashion.co.cc