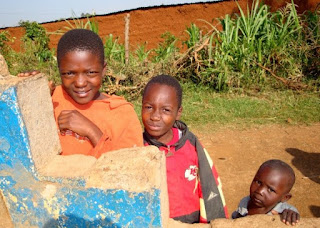 Sad also read the Save The Children Foundation report on the condition of children indeveloping countries. How could I not, Save The Children Foundation states that mostdeaths occur in developing countries, like Somalia, Ethiopia, Chad, Yemen, and Laos.
Poor children face the risk of death two times greater than children of the rich. This is due,because more than 30 percent of children in developing countries - are synonymous withpoverty - not a chance of good basic health services, such as equipment assistanceduring delivery, or the availability of basic intake of nutritional value adequate for infants.
Another result, more than 200 million children aged under five years old (toddlers) around the world are also not getting adequate health care. Thus, at least 10 million children dieeach year from diarrhea and pneumonia, which is actually quite mild and treatable illness.
I do not know, whether the report from Save the Children Foundation is also the result of research in our country too, which certainly did not mention that Indonesia is included in thecategory of developing countries are vulnerable to the death of infants and toddlers.
Ditulis oleh Sugeng Pribadi pada Senin, Desember 26, 2011