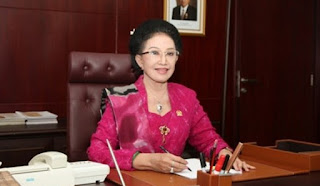 It may be that not many women in this country who have the spirit and stamina like you've stepped on this year to 80 years of age. Yes, DR. Hj. BRA. Mooryati Soedibyo, SS. M. Hum - former President Director of PT. Mustika Ratu Tbk. engaged in traditional industries Drugs & Cosmetics - is the fee that is exemplary figure. At the age of the woman as she was spending more time at home with his grandson granddaughter, Mrs. Moor, so this woman called, precisely still doing business in the fields of industry, and has just finished serving in government as vice chairman of the MPR.


Mooryati, a former member of the Council (DPD) in charge of religion, health, education, and women are "satisfied" with the award. Take for example, Upakarti, Kalpataru, and Satyalencana Development. However, as the professor Herb MURI award is very encouraging. "Herbal and traditional cosmetics is a wealth of natural and cultural heritage. It's not only acts to maintain the nation's health generation, empower thousands of women, but also a national asset. A number of traditional herbal products and cosmetics are now known to the world, " said Mrs. Moor.

Pioneering efforts since 1975, until now Mrs. Moor already producing about 800 kinds of traditional herbal medicine and cosmetics. About 600 of them already patented. "There are many other products (traditional herbal medicine and cosmetics) who continue to study and not yet marketed," added the woman who earned her doctorate from the Faculty of Economics University of Indonesia.